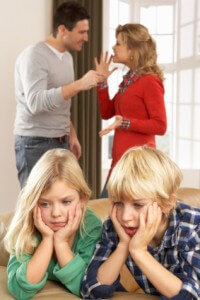 Parents Fighting Around Kids At Home By Rosalind Sedacca, CDC  Stay together for the sake of the kids? Generations of miserable parents followed that advice hoping their sacrifices would pay off for their children in the end. Many still believe that’s the only option for parents stuck in a dead-end marriage. As a Divorce & Co-Parenting Coach and Founder of the Child-Centered Divorce Network, I have another perspective. Having been raised by parents who chose to stay together in a miserable marriage, I personally opted in on the divorce side. For me, divorce is preferable to years of living in a home where parents fight, disrespect one another and children are immersed in sadness and anger. That’s the world I grew up in and the scars are still with me today, many decades later! I stress that staying in a marriage only for the kids is